Our Hut’s second Routemaster Bus Tour in collaboration with Catherine Croft from the Twentieth Century Society took place on Saturday 10th March. Again we were incredibly lucky to have a beautiful day, perfect for hopping on and off the bus to draw and photograph the interesting examples of 20th Century architecture en route. Our first stop by the river, just over Chelsea Bridge allowed us to draw both Battersea Power Station and Powell and Moya’s Churchill Gardens. At the second stop two hugely imposing buildings, 55 Broadway and The Ministry of Justice inspired some very strong drawings. At Mornington Crescent we admired the Black Cat Building and the cats definitely took centre stage. From Waterloo Bridge we saw a wealth of modern architecture. Perhaps the greatest thrill of the trip was when we returned to Stockwell and Colin Opher, General Manager of the Stockwell Bus Garage, who was kindly driving our bus, drove us through the garage itself.

‘I felt the applause at the end was a lovely spontaneous response from everyone, not only thanking you for the whole thing but a spontaneous outburst of affection for dear old Stockwell Bus garage, now clearly everyone’s favourite building thanks to Our Hut.’ 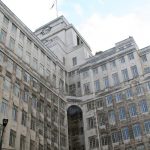 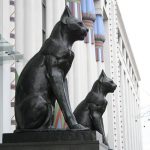 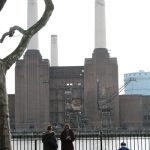 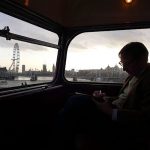