Our Hut’s third Routemaster Bus Tour in collaboration with Catherine Croft from the Twentieth Century Society and timed to coincide with the Campaign for Drawing’s  Big Draw, took place on Saturday 20th October. Against this autumn’s odds we beat the rain, making hopping on and off the bus to draw and photograph the interesting examples of 20th Century architecture en route umbrella free.

Our first stop was by the river Thames, just over Chelsea Bridge and allowing us to draw both Battersea Power Station by Gilbert Scott and Powell and Moya’s Churchill Gardens. The second stop was St Paul’s Lorrimore Square (1959-1960) in Kennington, designed by the architectural practice Woodroffe Buchanan & Coulter with its interesting copper clad roof, faceted cast concrete structure and handy playground attached. We then went up to Denmark Hill to look at another of Gilbert Scott’s buildings, the William Booth College which is the London College of the Salvation Army (1932), an undoubted monumental presence with Tudor detailing. Our last stop was Evelyn Grace, a new secondary school in the heart of Brixton designed by Zaha Hadid, winner of the Stirling Prize for Architecture in 2011and which made a number of us wish we were of secondary school age again. The afternoon ended with Colin Opher, General Manager of the Stockwell Bus Garage, driving the bus through the garage itself, enabling all our participants to see the interior workings of this marvellous grade 2* listed building. 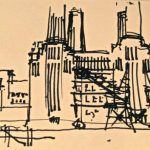 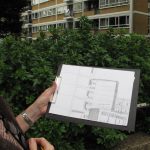 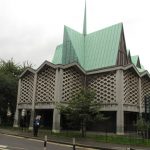 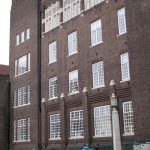 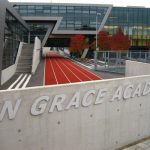