As part of the All Aboard for Stockwell project, Stockwell Bus Garage is being used as a catalyst for creative school workshops. Five local schools will be involved altogether, four carrying out architecture workshops with Our Hut and the fifth creating music inspired by the sounds of the garage with composer, Duncan Chapman. The architecture projects all start with introducing the children to architecture generally and then looking specifically at the Stockwell Bus Garage. Each class will create 2D and 3D artwork either focusing on the garage or as a response to an architectural brief for a hypothetical building. 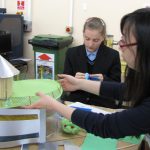 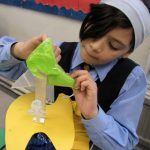