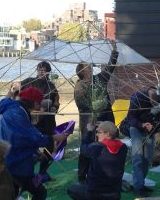 Our Hut, The Brick Box and The Big Draw

On Saturday 25th October 2014 at the raised cobbled platform on Bourne Valley Wharf Nine Elms embankment Our Hut along with The Brick Box ran an interactive/ collectively constructed geodesic bamboo cane dome build. This was aimed especially at children and their families. It provided both a counterpoint to the surrounding high-rises and a talking point for those interested in the future of the Nine Elms area. The installation became an illuminated ‘habitable’ hut – hosting drawing, weaving, decorating and storytelling.

The activity was listed on The Big Draw national website as well as on the Nine Elms South Bank website and drew a large and dedicated crowd. Alongside the dome construction there was a pop-up toast & drinks stalls, a light graffiti show. Everyone had a superb time finally finishing up at about 10pm!

Judy Ovens and Suzanna Prizeman from Our Hut also ran a series of guided walks of the area linking up the various layers of history in the Nine Elms regeneration area.