A Space for Flowers: The New Covent Garden Flower Market

The New Covent Garden Flower Market was moved to Nine Elms in 1974 from its original Covent Garden site in central London. The innovative High-Tech style building that houses it was designed by Gollins, Melvin and Ward (GMW Architects) 1971-4 and incorporates an impressive space-frame roof. Gollins, Melvin and Ward were established in 1947 and are responsible for a number of important modern buildings in London including the Aviva Tower As one of the largest projects in the Nine Elms on the Southbank (NESB) regeneration area. New Covent Garden Market will be redeveloped to provide a new fruit and vegetable market and a new flower market together with additional housing, retail and commercial space. 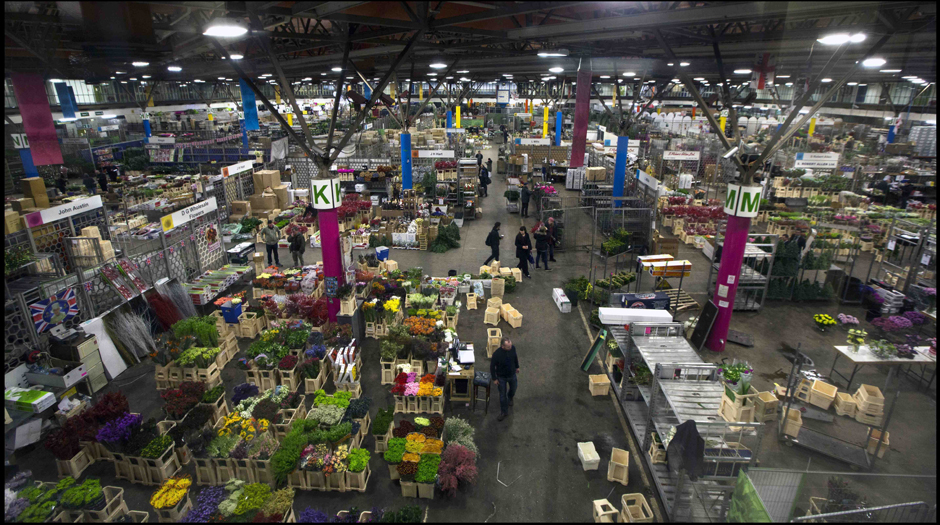 New Covent Garden Flower Market designed by Gollins Melvin Ward architects with engineers, Clarke Nicholls Marcel opened in 1974.That year it was the winner of the structural steel Design Award, sponsored by the British Steel Corporation and the British Constructional Steelwork Association Ltd.

The market is square in plan with sides of 100 metres and is arranged as a large top-lit, open plan, temperature-controlled hall, with offices on two storeys round the perimeter served on the upper level by cantilevered and glazed corridors.The market traders occupy flexible zones on the ground floor divided by portable, hexagonal-patterned metal screens.There are entrances and vehicle access for loading and unloading on all facades with the main dock on the East side.

Probably the most unusual architectural feature is the market’s ‘Nodus’ system space-frame roof covered with inverted glass reinforced polyester (GRP) pyramids. GRP provided translucence allowing the plants to photosynthesise, insulation and a glowing roofscape at night. Lyn Edwards who joined GMW architects in 1972, as construction of the flower market got underway, explained the structure of the building:

“. . . it’s a raft foundation upon which a large concrete box is built and that accommodates the basement or the underground car parking. Having got the ground floor slab and concrete columns beneath it running down into the foundations, we then located the steel structure . . . the organisational aspect of the trading floor required columns at the widest possible centres. So the steel structure reflects the concrete structure beneath it, it’s a single-storey building save for the mezzanine gallery around the perimeter. And all of that was constructed in steel, the perimeter is mainly aluminium, with aluminium cladding … the geometry of the roof is first of all dictated by the structural grid and then the inverted pyramids made of GRP sit on structural trees which branch out, to form a smaller grid of sub-structure. The GRP panels are supported off a space-frame, and I remember the space-frame being fairly unique, it’s about three metres deep and, being three acres in area, one of the largest ever constructed.”